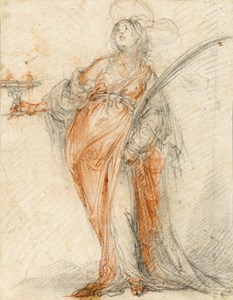 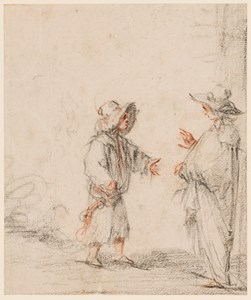 Little is known of the artistic education of Francesco Montelatici, known as Cecco Bravo, apparently on account of his violent temperament. He receives only a passing mention, as a student of Giovanni Bilivert, in Filippo Baldinucci’s account of 17th century Florentine painting. He is also thought to have been a pupil of Domenico Passignano and Matteo Rosselli, under whose supervision he worked on several fresco cycles in Florence in the 1620s. By 1629 Cecco Bravo had established his own studio in Florence and was admitted into the Accademia del Disegno. Apart from a few months in Emilia Romagna and Venice between 1630 and 1631, he worked in Florence and Tuscany for most of his career. In 1633 he decorated the cloister of the church of Santissima Annunziata in Pistoia with a cycle of lunette frescoes of six scenes from the life of Bonaventura Bonaccorsi. Among his most significant works in Florence were mural frescoes for the Sala degli Argenti in the Palazzo Pitti, painted in the late 1630s, while he also contributed to the decoration of the Casa Buonarroti on the Via Ghibellina. In 1656 Cecco Bravo was appointed master of the life drawing classes at the Accademia di San Luca in Florence. The later years of his career were largely spent painting easel pictures, many of which are recorded in a 1660 inventory of his studio but are now lost. In 1660 he was summoned to work at the court of the Archduke Ferdinand Karl of Austria at Innsbruck, where he died the following year. Cecco Bravo has only recently been recognized by art historians as one of the most original and distinctive artists of the Florentine Seicento. As Miles Chappell has noted, ‘his paintings, with their deep, at times passionate expression, forceful figures and impetuous definition with a loaded brush, represent almost a painterly inversion of the Florentine tradition of rigorous disegno…a stylistic identity that is at once spirited, elegant and unique in its pictorial dissolution of form.’ He was also a highly original and gifted draughtsman, and the 18th century Florentine collector and art historian Francesco Maria Niccolò Gabburri wrote of his drawings that they ‘are sought and treasured by connoisseurs because they truly possess a spirit and wonderful expression beyond all human understanding.’ Although a fairly large number of drawings by Cecco Bravo survive, only a handful of these may be related to surviving paintings. Among the artist’s drawings are numerous studies of male nudes, saints and religious subjects, as well as a series of mysterious allegorical drawings known as the ‘sogni’ (‘dreams’). Significant groups of drawings by Cecco Bravo are today in the collections of the Uffizi (which houses over 250 sheets) and the Biblioteca Marucelliana in Florence, the Louvre, the Biblioteca Olivieriana in Pesaro, the National Gallery of Scotland in Edinburgh, the Statens Museum for Kunst in Copenhagen, and elsewhere.