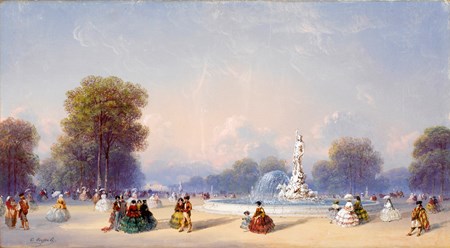 Arguably the foremost topographical artist in Europe in the second half of the 19th century, Carlo Bossoli was born near Lugano in Switzerland and grew up in Odessa in the southern Ukraine. As a young artist of considerable ability, he came to the attention of the Countess Vorontsov, wife of the governor of the province, and by the age of eighteen was selling his drawings of urban and landscape views. He travelled extensively around the Crimea, particularly in the early 1840’s, and produced a large number of drawings, watercolours and gouaches of everyday life and views of the main sites and cities there. Bossoli and his family returned to Europe in 1843, eventually settling in Milan. In 1850 he made his first visit to England and Scotland, and the following year visited Spain and Morocco. By 1853 Bossoli had settled in Turin, where he lived for the remainder of his career. With the outbreak of the Crimean War in 1854, however, Bossoli decided to travel to London, where his knowledge of the Crimea stood him in very good stead. The immense interest on the part of the British public for views of Sebastopol, Balaklava, Inkermann and the other battlegrounds mentioned in news reports encouraged Bossoli to produce a series of fifty-two Crimean views which were reproduced as lithographs for a lavish volume entitled The Beautiful Scenery and Chief Places of Interest Throughout the Crimea from Paintings by Carlo Bossoli, published in London in 1856. Among the many avid collectors of Bossoli’s watercolours of Crimean views were Queen Victoria and the Duke of Wellington. Bossoli exhibited his works at the Royal Academy between 1855 and 1859, and in 1857 undertook his longest journey yet, travelling through France, Belgium, Denmark, Norway, Sweden, Russia, Finland, Poland, Czechoslovakia, Germany and Switzerland. Each of his travels resulted in drawings and watercolours of the cities and sites that he visited. Between 1859 and 1861 he produced a splendid series of over a hundred gouaches illustrating the contemporaneous military campaign for the independence of Italy, commissioned by Prince Eugenio di Savioia-Carignano; all but ten of these are now in the collection of the Museo Nazionale del Risorgimento in Turin. Bossoli died of a heart attack in Turin in 1884.