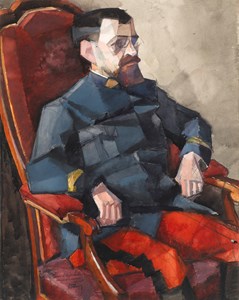 Georges Valmier began his artistic training in 1905, following a period of military service. In 1906 he enrolled in a free art school, the Académie Humbert in Paris, before entering the Ecole des Beaux-Arts in September 1907. Inspired in particular by the work of Paul Cezanne and Georges Braque, and later by Pablo Picasso and Fernand Leger, Valmier’s early paintings were firmly in the Cubist tradition. After serving in the First World War alongside Albert Gleizes, who was to become a close friend, Valmier was signed to a contract by the influential art dealer Léonce Rosenberg. He took part in the Section d’Or exhibition in 1920 and had his first exhibition at Rosenberg’s gallery L’Effort Moderne the following year. By this time Valmier’s work was dominated by abstract, geometric forms and vibrant colour. A founding member, along with Gleizes, of the group Abstract-Création, he exhibited extensively throughout the late 1920’s and 1930’s, both in Paris and abroad. He also contributed designs for costumes and stage sets for the Ballets Russes and several theatrical productions. Engaged on the decoration of the French railways pavilion for the Exposition Universelle in Paris in 1937, Valmier died suddenly that year, just short of his 57th birthday.