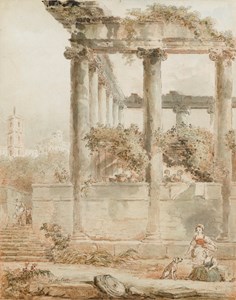 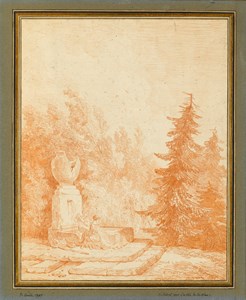 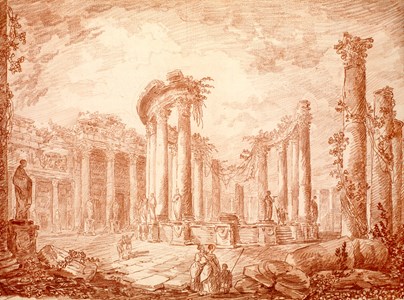 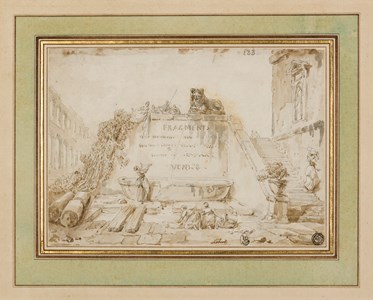 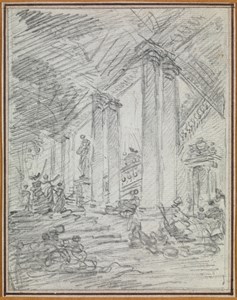 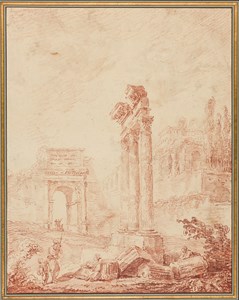 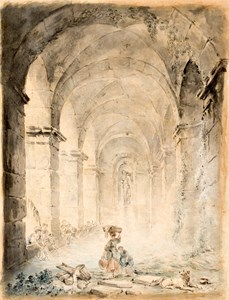 A student of the sculptor Michel-Ange Slodtz, Hubert Robert travelled to Rome in 1754 in the retinue of the new French ambassador to the Vatican, the future Duc de Choiseul. It was probably through the influence of Choiseul that, although he was not officially a pensionnaire at the Académie de France in Rome, the young Robert was able to study there for several years. Succinctly described by the director of the Académie de France, Charles-Joseph Natoire, as a young man ‘who has a penchant for painting architecture’ (‘qui a du goût pour peindre l’architecture’), Robert spent a total of eleven years in Italy, mostly in Rome. He fell under the particular influence of Giovanni Paolo Panini, the leading Italian painter of architectural views and capricci, who taught perspective at the Académie de France. Robert’s earliest paintings and drawings, both in composition and technique, are greatly indebted to the example of Panini. At the Académie de France Robert met and befriended Jean-Honoré Fragonard, and with him made sketching tours of the countryside around Rome. Robert returned to Paris in 1765, and the following year was admitted into the Académie Royale as a ‘peintre des ruines’, rather unusually being both reçu and agrée in the same year. He made his debut at the Salon in 1767, exhibiting picturesque landscapes and capricci, and soon had developed such a reputation for paintings of real and imagined Roman views, often incorporating ancient ruins, that he was given the sobriquet ‘Robert des Ruines’. A versatile artist, Robert often repeated and developed favourite views or compositions in several different formats, including chalk drawings, finished watercolours, small cabinet pictures and large-scale wall paintings. Appointed dessinateur des jardins du roi in 1778, Robert was also able to incorporate his artistic ideas into his landscape designs for gardens at Versailles and elsewhere. Despite being imprisoned during the Revolution, he remained a significant figure in the artistic scene in Paris until the end of the century.