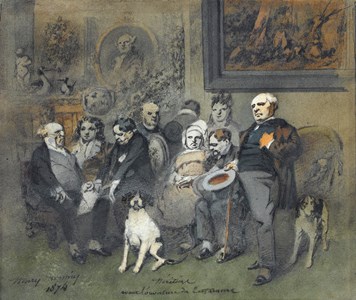 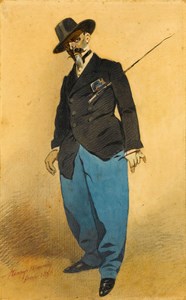 A writer, satirist and versatile actor as well as a celebrated painter, draughtsman and printmaker, Henry Bonaventure Monnier is best known for his depictions of bourgeois life in 19th century Paris. However, he only exhibited once at the Salon, in 1831, when he showed ‘plusieurs portraits à la sepia’. A gregarious character and with a reputation as something of a prankster Monnier studied briefly with Anne-Louis Girodet and later with Baron Gros, from whose studio he was later expelled as a disruptive influence. Monnier then worked as a lithographer, contributing to various books and magazines illustrating Parisian society types and manners, including the Moeurs parisiennes of 1826 and Six quartiers de Paris, published in 1828. With Eugène Lami, Monnier traveled to England, where he took lessons in watercolour drawing from the English caricaturist George Cruikshank. Between 1829 and 1830 he and Lami published a series of lithographs entitled Voyage à Londres, published in both Paris and London. As Edith Melcher has noted of the artist’s work of this period, ‘From a technical point of view, Monnier's [watercolours and lithographs]…show a method that was extremely simple and at the same time painstaking…His skill lay in the choice and combinations of colors and in the delicacy of the pen work, in both of which traits he may have profited by his study in England and especially his contact with Cruikshank.’ In 1830, Monnier wrote and published the Scènes populaires dessinées à la plume par Henri Monnier, wherein he introduced the character Joseph Prudhomme, ‘professeur d’écriture, expert assermenté près les cours et les tribunaux’. The Scènes populaires were immensely popular, and went through twelve editions in the author's lifetime. The portly, self-important M. Prudhomme was to appear in many of Monnier's drawings and also in plays, cast in various roles but always representative of the bourgeoisie. In 1853 Monnier produced the most successful of these plays, the Grandeur et décadence de Joseph Prud’homme, and the following year he published the character’s Memoires. (Indeed, so successful and popular was the figure of Prudhomme that he was adopted by Honoré Daumier in several caricatures of his own). Monnier may also be said to have influenced the work of his friend Honoré de Balzac, whose Comédie humaine he illustrated and who described the artist as ‘the personification of irony’. Among the many works written or illustrated by Monnier are Les Industriels: Métiers et professions en France, published in 1842, and Les Bas-fonds de la societé, published in 1862. Between 1866 and 1874 he also produced a series of watercolours entitled Les Diseurs de riens. The later years of his career were spent making finished, independent watercolours – masterful scenes of social observation and elegant conversation pieces - as well as coloured versions of his early lithographs. The writer and critic Charles Baudelaire wryly noted of Monnier that there were two main reasons for his success: ‘The first is that, like Julius Caesar, he fulfilled three functions at once – those of actor, writer and caricaturist. The second is that his talent is essentially a bourgeois one. As an actor he was cold and precise: as a writer, captious: and as an artist, he had discovered a method of doing his ‘chic’ from nature.’