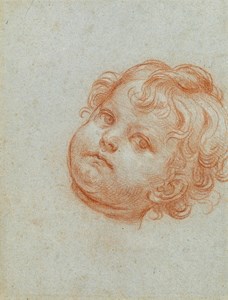 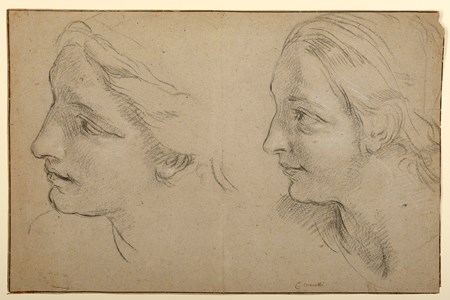 Born in the Marches, Carlo Maratti (or Maratta) entered the Roman studio of Andrea Sacchi in 1636 as a young boy of eleven, and was to remain in Rome for almost the whole of his career. His reputation was established in 1650 with his first public commission, an altarpiece of The Adoration of the Shepherds for the church of San Giuseppe dei Falegnami. He continued to work with Sacchi even as an independent artist, and took over the elder artist’s studio on his death in 1661. Three years later Maratti was elected principe of the Accademia di San Luca, by which time he had established one of the largest and most successful workshops in Rome. He enjoyed a remarkably successful career, receiving numerous important commissions for altarpieces, cabinet pictures and frescoes. Appointed painter to seven popes, as well as King Louis XIV of France, Maratti counted among his patrons the most illustrious Roman families, including the Barberini, Colonna, Rospigliosi, Spada, Pallavicini and Chigi. Among his many ecclesiastical commissions were the decoration of three chapels in St. Peter’s and altarpieces for the Roman churches of San Carlo al Corso, the Gesù, Santa Maria sopra Minerva, Sant’Andrea al Quirinale and many others. In 1674 Maratti received one of his most important commissions from Pope Clement X, for the extensive fresco decoration of the audience chamber of the Palazzo Altieri; a project left unfinished by the death of the pontiff. He also collaborated with artists such as Nicolas Poussin and Gaspard Dughet, and was in great demand as a portrait painter, particularly among English visitors to Rome. Like Raphael before him, Maratti strove to disseminate his compositions through the medium of prints, and at times created drawings expressly as designs for engravings. Following the death of Gianlorenzo Bernini in 1680 Maratti became the leading artist in the city, and such was his stature that in 1701 he was awarded the unprecedented honour of being named principe for life of the Accademia di San Luca. Although he painted very little in the last decade of his career, his influence remained strong well into the 18th century, as seen in the work of his many pupils and followers, known collectively as the Maratteschi.In his posthumously published life of the artist, Giovan Pietro Bellori notes that, even as a young artist, Maratti’s skill as a draughtsman was readily apparent: ‘his drawings were already held in great esteem because there was no one who equaled him, and Bernabeo [his elder half-brother] was earning no little profit from them, frequently selling them to foreigners interested in painting, because the skill of a master was apparent in them...’ Maratti’s drawing style differed from that of his master Sacchi in his preference for a more robust definition of form over the softer, more colouristic approach of the elder artist. A prolific draughtsman, he had a preference for red chalk, and made numerous studies of drapery, anatomy and pose for each of his paintings. Maratti seems to have jealously guarded his drawings, and kept most of them in his studio until his death. (He also assembled a large personal collection of drawings by other artists, including Domenichino and Sacchi, much of which is today in the Royal Library at Windsor Castle.) The majority of Maratti’s surviving drawings, the provenance of which can often be traced back to the artist’s studio, are concentrated in five large groups; in the Louvre, the Royal Collection at Windsor Castle, the Kupferstichkabinett in Berlin, the Museum Kunst Palast in Düsseldorf and the Real Academia de San Fernando in Madrid.