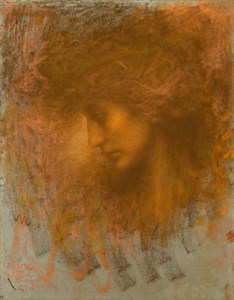 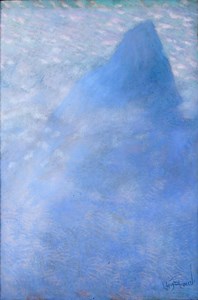 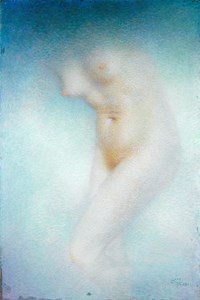 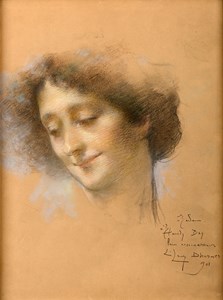 Lucien Lévy began his artistic career as a lithographer and decorator, and was the head of a decorative stoneware factory in Golfe-Juan. Trained at the Ecole Superieure de Dessin et Sculpture in Paris, he exhibited infrequently at the Paris Salons, and it was not until 1895, following a visit to Italy, that he began to take up painting seriously. His first exhibition, at the Galerie Georges Petit in Paris in 1896, was comprised mainly of pastels and a handful of paintings, and revealed the artist as a painter of mythical scenes and portraits, a vein he was to continue in throughout his career. (It was also at the time of the 1896 exhibition that he adopted the name Lévy-Dhurmer, adding part of his mother’s surname to his own.) An exhibition of his work in 1899 added to his reputation, and the following year he won a bronze medal at the Exposition Universelle. Soon established as a fashionable portrait painter, Lévy-Dhurmer also painted landscapes and decorative mural schemes; one such set of wall paintings, painted between 1910 and 1914 for a dining room in a Parisian home, is today installed in The Metropolitan Museum of Art in New York. In later years, he produced works inspired by the music of composers such as Debussy, Beethoven and Fauré. He travelled extensively throughout Europe, making numerous trips to Italy and also visiting Spain, Holland, North Africa and Turkey, while in France he worked in Brittany, the Savoie, Alsace, the Vosges and the Côte d’Azur, as well as around Versailles. He exhibited at the Salon des Artistes Français, the Société Nationale des Beaux-Arts and the Salon d’Automne, and mounted a number of one-man shows throughout his career. A retrospective exhibition of his work was held at the Musée des Arts Décoratifs in Paris in 1952, the year before his death.Lévy-Dhurmer had a penchant for the medium of pastel, with which he was able to achieve striking chromatic effects. Indeed, he had a distinct preference for the medium, using it for portraits, allegorical scenes and landscapes, all of which he exhibited regularly at the Salon des Pastellistes Français between 1897 and 1913. It was in reference to such pastels that one contemporary critic, in one of the first accounts of the artist’s work to appear in an English publication, described Lévy-Dhurmer’s paintings as ‘the manifestation of one of the most remarkable figures in the art world of to-day. For here we have something more than promise. This is the work of an artist in full possession of style and method, master of himself and of his art.’ A modern scholar has reserved particular praise for Levy-Dhurmer’s pastels; ‘Here indeed, is unquestionably the Symbolist painter who shows the most brilliant mastery of pastel…his pastels strike us with the perfection of their execution and the originality of his inspiration.’