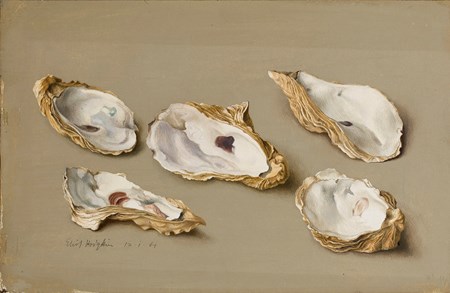 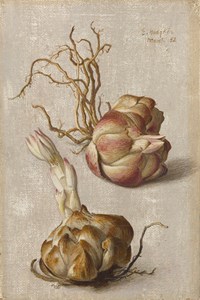 Eliot Hodgkin studied at the Byam Shaw School of Art and, for a very brief period, at the Royal Academy Schools, where he learned to paint not only in oils but also in tempera, influenced in this medium by the work of Joseph Southall and Maxwell Armfield. He began his career as a mural painter and fashion illustrator, publishing a book on the subject in 1932, but by the middle of the 1930’s was established as a painter of still lives and landscapes, exhibiting regularly at the Royal Academy. Within a year or two of his first one-man exhibition, held in a London gallery in 1936, Hodgkin had begun working in egg tempera, and many of his finest works were painted in this demanding medium. As he wrote in an essay published in 1967, ‘tempera has no attraction for me simply because it was used by the Italian primitives, most of whose work does not greatly appeal to me. I use it because it is the only way in which I can express the character of the objects that fascinate me. With oil paint I could not get the detail without getting also a disagreeable surface: moreover I should have to wait while the paint dried before continuing.’ During and after the Second World War, Hodgkin painted a number of views of plants growing amid the bombed wreckage of London, exhibiting some of these works at the Royal Academy. He also regularly exhibited his work at The Leicester Galleries, the Reid Gallery and Agnew’s in London and Durlacher Brothers in New York. Although he turned down the opportunity of becoming an Academician in 1959, Hodgkin continued to show at the Royal Academy throughout his career, exhibiting a total of 113 paintings at the Summer exhibitions between 1934 and 1981. His subject matter remained largely confined to still life compositions and landscapes, generally on a small and rather intimate scale. Owing to worsening eyesight, Hodgkin gave up painting in 1979, and a sale of the contents of his studio was held in London in 1983, four years before his death.