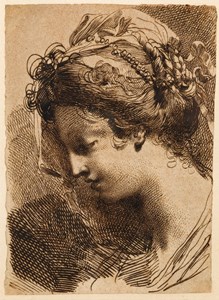 Aside from trips to Venice in 1760 and Paris and London in 1788, Gaetano Gandolfi seems to have worked almost exclusively in his native Bologna, where he established a prosperous career. As a student at the Accademia Clementina he won two medals for sculpture and four medals for his drawings. A brief period of study in Venice in 1760 was of great importance, and is reflected in the vigorous brushwork and rich colours of his paintings. Gandolfi received numerous commissions for altarpieces for churches throughout Emilia and elsewhere, and also worked extensively as a fresco painter. One of his first important decorative projects was a ceiling fresco of the Four Elements, painted for the Palazzo Odorici in Bologna in collaboration with the quadraturista Serafino Barozzi. This was followed by work in several other Bolognese palaces, including the Palazzo Guidotti, the Palazzo Centurione and the Palazzo Montanari. In 1776 Gandolfi painted a massive canvas of The Marriage at Cana for the refectory of the Lateran convent of San Salvatore, now in the Pinacoteca Nazionale in Bologna. Another prominent commission was for the decoration of the cupola of the church of Santa Maria della Vita, painted between 1776 and 1779 with frescoes of The Virgin in Glory and The Sacrifice of Manoah. In the later years of his career Gandolfi also produced easel pictures of historical and mythological subjects. Throughout his life he remained actively involved in the affairs of the Accademia Clementina, where he taught a class in life drawing. He was a gifted draughtsman, and his drawings were highly prized by contemporary collectors.