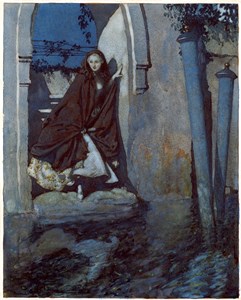 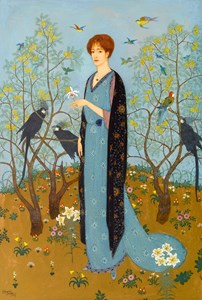 Born and raised in Toulouse, Edmond Dulac was from his youth something of an Anglophile, adopting English dress and manners to such an extent that he was known as ‘l’anglais’ at school. Abandoning his law studies to enrol at the Ecole des Beaux-Arts in Toulouse, he later studied briefly at the Académie Julian in Paris. Changing his name from Edmond to Edmund, he eventually arrived in London in 1904, and soon found work as an illustrator, earning a commission for sixty watercolours to illustrate a new edition of the Brontë novels. These illustrations, as one modern scholar has noted, ‘mark the beginning of a long preoccupation with blues...Dulac showed an interest in the richness and refinement of blue that was to distinguish his work for the next few years.’ Further commissions followed, including illustrations and caricatures for Pall Mall Magazine, and Dulac soon came into contact with the work of other illustrators such as Arthur Rackham, William Heath Robinson and Edmund Sullivan. The commission that firmly established Dulac’s reputation came in 1907, when for the publishers Hodder and Stoughton he provided fifty illustrations for a new edition of Stories from the Arabian Nights; the watercolour drawings for the project were exhibited at the Leicester Galleries in London. The exotic nature of the stories sparked in Dulac a lifelong interest in Oriental imagery, filtered in his drawings through the particular influences of both Japanese prints and Indian and Persian miniatures, which was also to be seen in his illustrations for The Rubaiyat of Omar Khayyam, published in 1909. As another author has pointed out, in both the Arabian Nights and the Rubaiyat illustrations, as well in later works such as the present sheet, ‘Dulac makes extensive and highly evocative use of a Whistlerian greeny-blue tone. Its effect is to give the illustrations a dawn, dusk, or night-time setting, thus adding to their mystery and, in the case of dawn and dusk images, creating a feeling of time passing and of a dream being ended by the coming of day or of nocturnal oblivion.’ Dulac became a naturalised British citizen in 1912. After the First World War he began working on stage and costume designs, tapestry cartoons and portrait caricature, while from 1923 onwards he also provided cover paintings for the magazine American Weekly. These illustrations were to be the artist’s main source of income during the 1930’s, when the market for richly illustrated books declined as British publishers began to use cheaper black and white illustrations. In these years Dulac also worked on more ephemeral items as a designer of postage stamps, for which he would come to be particularly highly regarded, as well as of medals, playing cards, interiors, stage sets and bank notes. He died at the age of seventy, suffering a heart attack following a vigorous bout of flamenco dancing. The critic R. H. Wilenski, writing shortly after the artist’s death, noted that ‘Edmund Dulac is a collector’s artist. His illustrated books, the water-colour and gouache drawings made for them and the outline studies of details on transparent paper are all collector’s pieces...I knew him well for many years and often watched him work...he used Japanese brushes, kept his colours in small, lidded ivory pots and always put his tint on boldly using blotting paper to reduce it when required. If a flaw occurred he always scrapped the drawing though he had worked on it for days. For he aimed, within his limits, at perfection; and within those limits, he habitually attained it.’