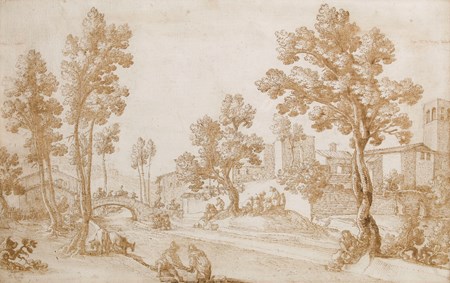 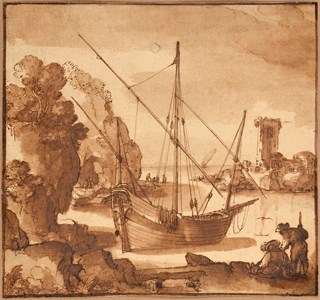 Said to be a pupil of Giulio Parigi, Remigio Cantagallina produced his earliest known works, a series of landscape etchings, in 1603. Relatively little is known of his life and career, which was spent mostly in Florence, although a trip to Flanders between 1611 and 1613 is documented by a number of drawings in a sketchbook today in the Musée Royale des Beaux-Arts in Brussels. Described by Filippo Baldinucci as ‘famous for his landscape drawings in pen’ (‘celebre in disegnar paesi a penna’), Cantagallina was particularly influenced by the work of such Northern artists as Paul Bril. He was, in turn, to be an important influence on the later generation of landscape draughtsmen working in Florence, including Ercole Bazzicaluva, Baccio del Bianco and Jacques Callot, whom Cantagallina seems to have befriended on his arrival in Florence in the early years of the 17th century, and may have helped to train. Among the few pubic works commissioned from the artist were the ephemeral decorations to celebrate the wedding in Florence of the Grand Duke Cosimo II de’ Medici to Maria-Maddalena of Austria, executed in collaboration with Parigi in 1508. Only one painting by Cantagallina is known, however; a very large Last Supper painted with his brother Antonio in 1604, intended for a monastery in his native town of Sansepolcro and now in the Museo Civico there.A prolific artist, Cantagallina produced a large number of highly finished topographical views of Florence and other sites in Tuscany, drawn with warm brown washes, that are among his finest achievements. Many of these drawings, such as a remarkable large View of Siena in the Uffizi, were almost certainly intended as independent works of art. His draughtsmanship was closely related to his work as a printmaker, and he produced over sixty etchings, mostly of pastoral landscapes and festival scenes. The largest collection of landscape drawings by Cantagallina, numbering more than two hundred sheets, is in the Uffizi in Florence; one of these, a drawing dated 1655, is the artist’s last known dated work.