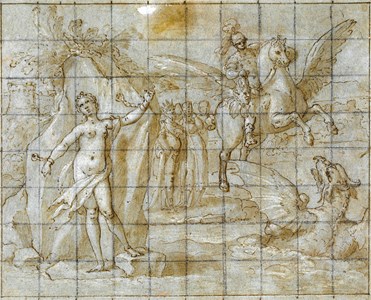 A pupil of Andrea Semino, Bernardo Castello was also influenced by the work of Luca Cambiaso, Returning to Genoa after a trip to Ferrara in 1575, he executed a number of paintings for local churches and palaces; his earliest dated work is an altarpiece for a church outside Genoa, dated 1580. Among his important decorative projects were the frescoes in the Villa Spinola and the Villa Centurione in Sampierdarena and a ceiling in the Palazzo de Franchi e Castello in Genoa. In 1586, Castello designed a frontispiece and twenty illustrations for an edition of Torquato Tasso’s epic poem Gerusalemme Liberata, published in Genoa in 1590 with great success. The illustrations established Castello’s reputation, and pleased Tasso so much that he wrote a sonnet in honour of the artist. Three further editions of the poem, again accompanied by Castello’s illustrations, were published in 1604, 1615 and 1617, and these served to secure the artist’s contemporary fame. Castello also frescoed scenes from the Gerusalemme Liberata in several Genoese palaces, including the Palazzo de Franchi and Villa Centurione mentioned above, as well as the Palazzo Imperiale di Campetto and the Villa Imperiale Scassi at Sampierdarena. Among his more important paintings for Genoese churches are a Saint Ursula of 1590 in Santa Maria della Vigne and a Martyrdom of Saint Peter for Santa Maria di Castello, executed in 1597. Castello made a number of trips to Rome, beginning in 1604, when he was commissioned to paint an altarpiece of The Calling of Saint Peter for the basilica of St. Peter’s. He also painted an altarpiece in Santa Maria sopra Minerva for Cardinal Giustiniani, the success of which led in 1605 to a commission to decorate part of the Palazzo Giustiniani at Bassani di Sutri, outside Rome. During a later trip to Rome, in 1616, Castello painted frescoes for the Palazzo Rospigliosi Pallavicino and the Palazzo del Quirinale.