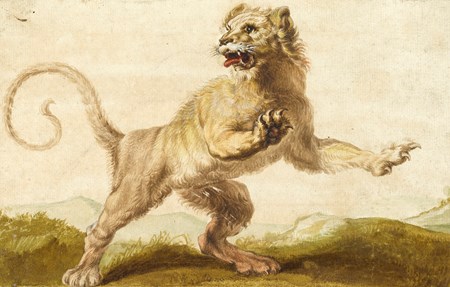 Born in Danzig (modern-day Gdansk in Poland) around 1630, Carl Borromäus Andreas Ruthart was largely self-taught as an artist, and established a reputation as a painter of wild animals and hunting scenes. He was briefly in Rome in 1659 before being admitted to the painter’s guild in Antwerp in 1664, while later that year he is documented in Regensburg. Between 1665 and 1667 Ruthart was in Vienna, working for Prince Karl Eusebius von Liechtenstein. In 1672 he became a monk of the Celestine order at the monastery of Sant’ Eusebio in Rome, later transferring to the monastery of Santa Maria di Collemaggio in L’Aquila, in the Abruzzo region northeast of Rome, where he seems to have lived and worked for the rest of his life. Known as Pater Andrea, he is still documented there in 1703, and is assumed to have died not long afterwards. Although best known and most successful as a painter of wild animals, Ruthart also painted a handful of religious works for the churches with which he was associated, namely two altarpieces for Sant’ Eusebio in Rome and fourteen scenes from the life of the founder of the Celestine order for the church at L’Aquila. Highly esteemed in his lifetime, Ruthart’s animal paintings found their way into several important European collections, including those of the Archduke Leopold Wilhelm, Field Marshal von der Schulenberg and Count Bruhl, as well the Liechtenstein, Harrach, Czernin and Esterhazy collections. Paintings by Ruthart were also owned by the Dukes of Devonshire and the Earls of Shrewsbury.