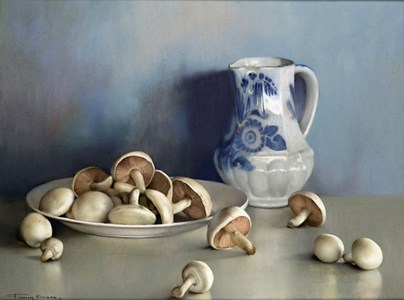 The son of the decorative painter Henri Baes, Firmin Baes was active as a portrait painter and a painter of still life subjects, nudes, landscapes and interiors. He studied under Léon Frédéric at the Académie Royale des Beaux-Arts in Brussels between 1888 and 1894, and the elder artist’s influence is evident in many of Baes’s early paintings. Baes was a superb draughtsman, adept at charcoal, chalk and pastel, and often worked on a large scale. Between 1899 and 1900 Baes and his father collaborated on the decoration of a hotel restaurant in Brussels. In 1900 his painting The Archers won a bronze medal at the Exposition Universelle in Paris, which brought the young artist to wider notice. (The English periodical The Artist noted that ‘M. Firmin Baes is a very young painter, admirably gifted, who neglects no labour to realise his very personal ideal. ...his skill borders on mastery.’) Baes exhibited annually at galleries in Brussels and elsewhere in Belgium, and also occasionally in Europe and in America. While at first he showed oil paintings and large charcoal drawings, as his career progressed he began to work mainly in pastel, producing highly finished portraits, still life subjects and nudes. He achieved much success as a portrait painter and pastellist. In 1910 Baes built a large house and studio in Brussels which he filled with his collection of paintings and objets d’art, and where he would receive visitors and patrons. He worked to a strict schedule, with mornings spent on portrait sittings and paintings from posed nude models, while the afternoons were devoted to the painting of still life subjects, interiors and landscapes. A member of the Belgian artist’s association ‘Pour l’Art’ from 1898 onwards, Baes exhibited with the group almost every year for the rest of his career. He became a member of the Société Royale des Beaux-Arts in 1919, and between 1920 and 1921 painted a memorial to the Belgian army for Hôtel des Invalides in Paris. Baes’s account book lists a total of 1,340 paintings sold to collectors, of which 212 were portraits and 264 were still life subjects, together with 152 nudes and 227 landscapes. The artist also produced a number of posters and decorative wall panels, as well as numerous drawings and smaller pastels, which were often given to various friends. Paintings and pastels by Baes are today in the collections of several museums in Belgium, and elsewhere.