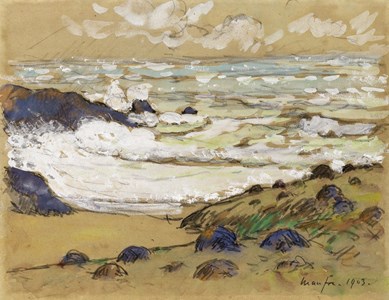 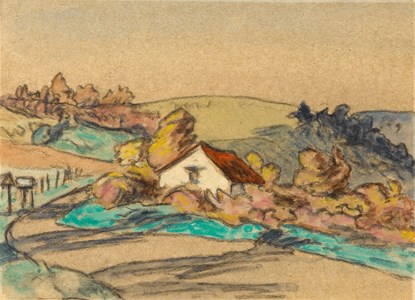 A native of Brittany, Maxime Maufra was not formally trained as an artist and at first worked in commerce, painting only in his spare time. Although he submitted two paintings to the Salon of 1886, he did not take up painting as full-time profession until 1890. In that year he made his first visit to Pont-Aven, where he met Paul Gauguin and Paul Serusier. Two years later he settled in Montmartre in Paris, with a studio at the Bateau-Lavoir. He continued to spend a considerable amount of time in Brittany throughout the early 1890’s, meeting several of the other painters working at Pont-Aven and Le Pouldu. Like Gauguin, Serusier and Charles Filiger, he contributed to the decoration of the inn of Marie Henry at Le Pouldu. Unlike many of these artists, however, Maufra preferred to depict quiet, almost Symbolist landscapes devoid of figures. In an exhibition of his work at the Le Barc de Boutteville gallery in 1894, he divided his landscapes into three different types, which he titled ‘Les effets’, ‘Les phénomenes’ and ‘Synthèses de la Bretagne’. Though the exhibition was well received by some critics, it did not result in many sales. In 1896, however, Maufra’s fortunes rose when he was given his first exhibition at the Galerie Durand-Ruel, who soon had the artist under contract. His friendship with Gauguin remained a close one until the latter’s departure for Tahiti, and the elder artist continued to encourage him in his work. Maufra spent his summers working in Brittany, a practice he maintained throughout his career, although he soon found Pont-Aven too crowded with artists and chose instead to live and work in more isolated communities, among fishermen and peasants. As Caroline Boyle-Turner has noted, ‘throughout his life, he retained his love of Breton subjects, exploring them again and again.’ He was particularly fond of the landscape around Quiberon on the southern coast of Brittany, and bought a house there in 1903. Like several artists of the Pont-Aven circle, Maufra was also active as a printmaker, working in etching and lithography. He died in 1918, at the age of fifty-seven.