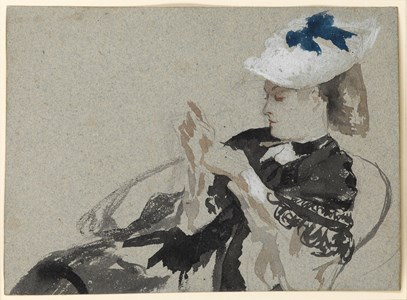 Trained in Paris, Jacques-Joseph (known as James) Tissot made his Salon debut in 1859 and soon secured a reputation for his genre and historical scenes. In 1871 he moved to London, where he developed a distinctive and commercially successful style of painting that married French elegance with the English taste for genre subjects. He also took up the medium of drypoint etching, which he used to reproduce his paintings for a wider audience, adding to their reputation. After eleven years in London, Tissot returned to Paris, where he continued to paint elegant portraits of ladies of Belle Epoque society. He also began work on an ambitious series of large genre paintings devoted to the theme of the modern Parisian woman, entitled La femme à Paris, which was exhibited at the Galerie Sedelmeyer in Paris in 1885. It was near the end of this project that he experienced a radical and somewhat unexpected religious epiphany. He decided to devote the remainder of his artistic career to Biblical subjects, beginning with a series of 365 gouache drawings illustrating the life of Christ. After working on the project for a decade, including several visits to Palestine, Tissot exhibited the drawings to popular acclaim in Paris, London and throughout America; they were eventually published in 1896 as La Bible de James Tissot.