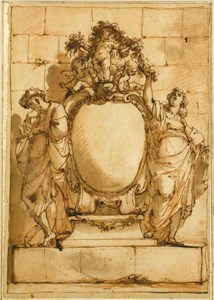 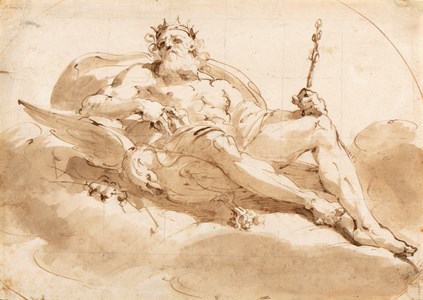 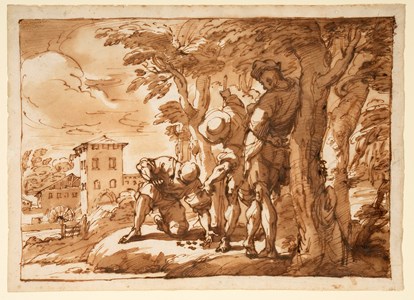 Ubaldo Gandolfi entered the Accademia Clementina in Bologna at an early age, and by 1745 had already won a prize for figure drawing, earning two more in the next four years. Between 1749 and 1759, however, he does not appear in any records of the Accademia, and it may be supposed that he spent some of this period travelling around Italy. (His biographer Marcello Oretti notes that the artist ‘vidde Firenze, Venezia ed altre famose scuole.’) One of his first independent projects was the decoration of several rooms in the Palazzo Malvasia in Bologna, commissioned around 1758 by the Bolognese nobleman and art historian Carlo Cesare Malvasia. Together with his younger brother Gaetano, Ubaldo visited Venice in 1760; a trip that was to have a significant impact on the artist’s later work, with its vigorous brushwork and expressive treatment of colour. Throughout much of his career Ubaldo maintained close contacts with the Accademia Clementina, where in 1761 he was appointed one of four direttori di figura, or professors of life drawing. One of his most important patrons was the Marchese Gregorio Casali, a fellow member of the Accademia Clementina, who commissioned several works from the artist, notably two large paintings of Perseus and Andromeda and Selene and Endymion for the Palazzo Pubblico in Bologna. Apart from an Apotheosis of Hercules in the Palazzo Malvezzi in Bologna, relatively little of his large-scale mural decorations survive today. Over a career of some thirty years, Ubaldo Gandolfi was active as a painter of frescoes, altarpieces and mythological scenes, as well as a charming series of small, informal portraits of women and children that have the appearance of character studies. He also worked as a sculptor, and a handful of terracotta sculptures of saints are known today. However, he seems to have struggled to win commissions for significant religious pictures, and never achieved the level of success enjoyed by his brother Gaetano.Like his brother, Ubaldo Gandolfi was highly regarded as a draughtsman in his lifetime, as is noted by Oretti, who adds that the artist continued to attend life drawing classes at the Accademia Clementina well into his independent career. Many of Ubaldo’s extant drawings remain unconnected to surviving paintings by the artist, and several have the appearance of being independent compositions. In fact, it has been suggested that, ‘chronically lacking commissions, [he] often fulfilled his creative urges and “kept his hand in” by making drawings.’