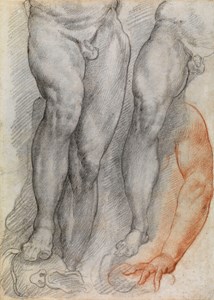 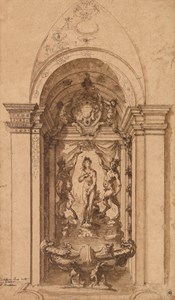 A painter and engraver, Cherubino Alberti was born into a family of artists in the Tuscan town of Borgo San Sepolcro (today Sansepolcro) that included his father Alberto, his brothers Giovanni and Alessandro and his cousin Durante. He was in Rome by 1571, when he engraved a painting by Federico Zuccaro in the church of the Trinità dei Monti. It was also in Rome that he learned the art of engraving, in the studio of Cornelis Cort. Alberti produced some 180 prints, mostly reproductive works after Michelangelo, Raphael, Polidoro da Caravaggio, the Zuccari and other artists. Most of his prints date from the 1570’s and early 1580’s, after which he seems to have devoted himself mainly to painting. Alberti's earliest documented work as a painter is a fresco decoration on the rear facade of the Vatican Library, painted in 1587. Together with his brother Giovanni, Cherubino Alberti was particularly admired for his skills as a painter of di sotto in su ceiling decorations, a talent he employed in several Roman churches. The two brothers worked together frequently, and were engaged by Pope Clement VIII on the decoration of the Sala Clementina, the largest room in the Vatican, between 1596 and 1604, and again in the sacristy of San Giovanni in Laterano, completed in 1602. The brothers also collaborated on the fresco decoration of the Oratorio del Crocifisso in the church of San Rocco in their native town of Sansepolcro. A number of other joint projects by Cherubino and Giovanni Alberti are now lost, such as the decoration of the interior of the Summer Palace on the Quirinal Hill, painted for Pope Gregory XIII between 1584 and 1585. Cherubino’s last major papal commission was the decoration of the vault of the Aldobrandini chapel in Santa Maria sopra Minerva in Rome, completed in 1610. Three years later, in 1613, he was elected principe of the Accademia di San Luca.