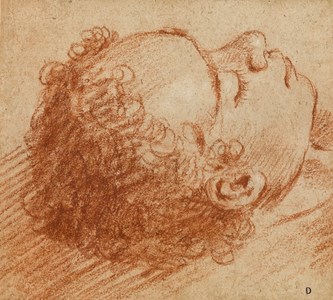 The oldest member of the Carracci dynasty, Ludovico Carracci trained in the studio of Prospero Fontana in Bologna before undertaking a trip to Florence, Parma, Mantua and Venice to complete his artistic education. He was back in Bologna by 1578, when the joined the painter’s guild, the Compagnia dei Pittori. Throughout the 1580’s Ludovico worked closely with his cousins Annibale and Agostino Carracci, with whom he shared a workshop. All three artists collaborated on the series of frescoes illustrating the Story of Jason in the Palazzo Fava in Bologna, executed between 1583 and 1584. The three Carracci also established a private academy, whose teachings were to become a dominant influence on Bolognese painters of the succeeding generation. Among Ludovico’s early independent works are the large altarpiece known as the Madonna dei Bargellini of 1588, now in the Pinacoteca Nazionale in Bologna, and the Cento altarpiece of The Holy Family with Saint Francis of 1591. The three Carracci continued to work together on the further decoration of the Palazzo Fava in the late 1580’s and the Palazzo Magnani, completed in 1592. Following Annibale’s departure for Rome in 1595, closely followed by Agostino, Ludovico took over the Carracci academy and workshop. He worked on numerous decorative projects in and around Bologna, culminating in the frescoes at San Michele in Bosco of 1605-1606. Apart from a brief trip to Rome in 1602 and a stay in Piacenza between 1605 and 1609, when he collaborated with Camillo Procaccini on the decoration of the nave and apse of the Duomo, Ludovico Carracci remained in Bologna throughout his career. He continued to oversee the Carracci academy, known as the Accademia degli Incamminati, until his death.