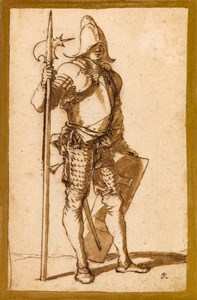 Salvator Rosa studied in Naples with his brother-in-law Francesco Fracanzano, as well as probably with Jusepe de Ribera and Aniello Falcone, before making two trips to Rome in the second half of the 1630’s. The following decade found him working in Florence, where among his patrons was Giovanni Carlo de’ Medici. It was in Florence that Rosa developed an interest in historical and mythological subjects, as well as in subjects of witchcraft and the occult. An eccentric personality, he moved in literary and intellectual circles, which in turn inspired his idiosyncratic artistic vision. Returning to Rome in 1649, Rosa continued to paint unusual, often fantastical or macabre subjects alongside the paintings of battle scenes and wild landscapes with which he had first made a name for himself, and also began to produce prints. In the late 1660’s his compositions became darker and more oppressive. He was also a gifted and prolific printmaker, producing over one hundred etchings, almost all of which were published and widely distributed in his lifetime.Rosa was a remarkable draughtsman, and his spirited, exuberant drawings were highly praised by connoisseurs even in his own day. The bulk of the nine hundred or so surviving drawings by the artist are figure studies, usually in his preferred medium of pen and ink. Many of the drawings from the early part of his career are signed, and these may have been sold to collectors or presented as gifts to friends or patrons. However, almost no signed drawings dating from after 1649 exist, and it has been suggested that, after his return to Rome, Rosa chose to keep most of his drawings for himself, and not part with them.