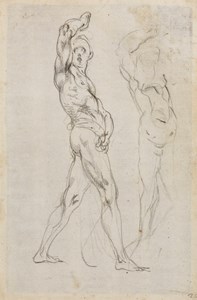 Named Pontormo after his birthplace, Jacopo Carucci arrived in Florence around 1507. His early training with Leonardo da Vinci was followed by brief periods in the studios of Mariotto Albertinelli and Piero di Cosimo. Of more lasting importance, however, was a longer period of apprenticeship with Andrea del Sarto. Pontormo was already working as an independent artist by 1515, when he was engaged on the decorations celebrating the entry of the Medici Pope Leo X into Florence. His first major work was an altarpiece of the Madonna and Child with Saints, commissioned in 1518 for the Pucci chapel in San Michele Visdomini in Florence. With this painting Pontormo established a new, more expressive and idiosyncratic pictorial language, with strongly lit, agitated figures. Around 1520, he worked alongside Del Sarto and Franciabigio at the Medici villa at Poggio a Caiano, where he painted a lunette fresco of Vertumnus and Pomona. Escaping an outbreak of the plague in 1522, Pontormo retired to the Certosa del Galluzzo, outside Florence, where he painted a cycle of scenes from the Passion in the monastery cloister. Completed in 1524, these frescoes provide further evidence of the painter’s eccentric vision, with his distinctive figures placed within a compressed pictorial space. Soon after returning to Florence, Pontormo painted what is arguably the masterpiece of his early maturity; the Entombment altarpiece of around 1526-28 in the Capponi chapel of the church of Santa Felicità. Following the death of Andrea del Sarto in 1530 Pontormo assumed his position as the leading painter in Florence. His later years were spent working for the Medici, decorating their villas at Careggi and Castello and producing a number of portraits and tapestry cartoons. In the last decade of his life he worked on the decoration of the choir of the Medici church of San Lorenzo, completed after Pontormo’s death in 1556 by his pupil and assistant Agnolo Bronzino.A supremely inventive draughtsman, Pontormo worked almost exclusively in chalk. He used both red and black chalk in the early years of his career, although the latter becomes predominant in the 1530’s and is used almost exclusively after 1545. In very general terms, the artist seems to have used black chalk for the purposes of experimentation and invention when developing his compositional ideas, and either black or red chalk for more refined figure studies.Most of Pontormo’s drawings are studies of single figures, often nude, and many appear to be preparatory studies for paintings, although this is by no means always self-evident. As Cox-Rearick has written, ‘a large number of Pontormo’s preparatory drawings are actually independent sketches of a most private and spontaneous sort, quite unlimited by a preconceived scheme leading in a predictable and direct line to the final painted solution.’ Although Pontormo was a fairly prolific draughtsman (Vasari mentions ‘molti disegni, cartoni, e modelli di terra bellissimi’ left in his studio after his death), his drawings remain quite scarce outside the Uffizi, which houses the vast majority of his drawn oeuvre. Indeed, relatively few drawings by this seminal Mannerist artist are today to be found in public collections outside Italy.