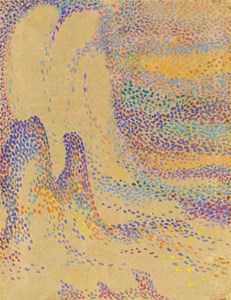 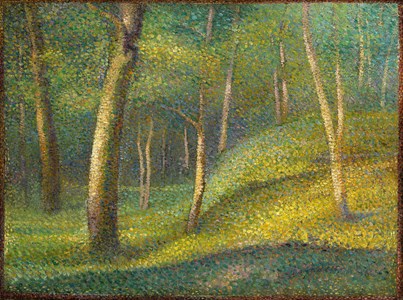 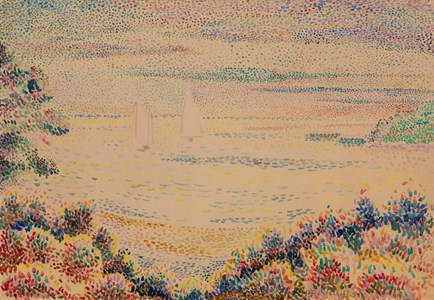 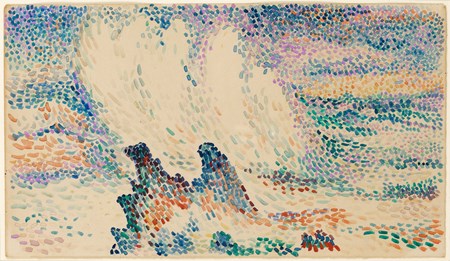 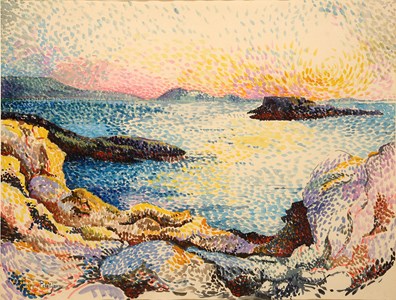 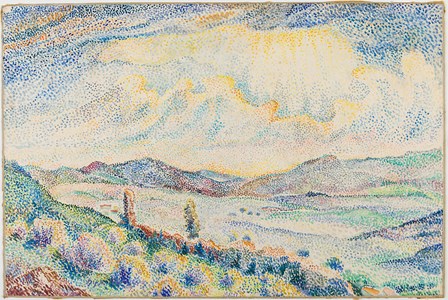 Hippolyte Petitjean made his Salon debut in 1880, and four years later met Georges Seurat. Petitjean soon joined the group of artists known collectively as the Neo-Impressionists, led by Seurat and Paul Signac. Petitjean enjoyed a close friendship with Seurat, whose influence is particularly noticeable in the younger artist's dark conté crayon drawings of this period. In his mature work, he continued to remain true to the pointillist techniques of Seurat, although his compositions were also influenced by the work of the Symbolist painters, particularly Pierre Puvis de Chavannes. Petitjean exhibited at the Salon des Artistes Indépendants in Paris from 1891 onwards, and the following year took part in a number of small gallery exhibitions devoted to the Neo-Impressionist artists. Unlike many of his Neo-Impressionist colleagues, Petitjean struggled financially for much of his career, and for many years lived in poverty, earning a modest salary as an art teacher. It was not until the sale of some of his paintings at a group exhibition of Neo-Impressionist artists at the Galerie Durand-Ruel in 1899 that he achieved a small measure of financial stability, but later years still found sales few and far between, with paintings, drawings and watercolours often sold to creditors in exchange for services, or to pay bills. Nevertheless, Petitjean continued to exhibit at the Indépendants, and in the 1909 exhibition a painting was bought by the State. After 1917 Petitjean’s production slowed considerably, although his work continued to be exhibited with those of the Neo-Impressionists. Although he lived to the age of seventy-five, Petitjean was never very prolific as a painter. His oeuvre of around 350 paintings includes landscapes, urban scenes, mythological subjects and, occasionally, portraits. These works were often preceded by several preparatory studies, made en plein-air, though the paintings themselves were almost always executed in his large Parisian studio, built with the proceeds from the sale of two paintings by his friend Seurat. Petitjean maintained an adherence to Neo-Impressionist principles throughout his career, even after the decline in the movement’s critical fortunes following Seurat’s death in 1891. Not long after this some members of the group, notably Camille Pissarro and his son Lucien, started to become disillusioned with the rigid demands of the pointillist technique. However, Petitjean seems never to have completely abandoned pointillism as a method of artistic expression.