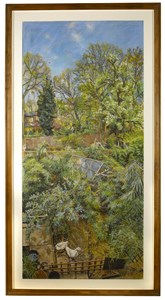 Christopher Bramham studied at the Bradford College of Art in 1970 and the Kingston-upon-Thames Art School between 1971 and 1973. He spent a number of years working as a part-time teacher, and eventually settled in Richmond, Surrey. A friend and disciple of Lucien Freud, whom he met in 1982 and who was instrumental in bringing his work to greater public attention, Bramham has devoted his mature career to landscape painting. As the artist noted in a recent interview, ‘I paint landscape because I find it endlessly beautiful, birds, trees, mud, wetness, roughness, smoothness. Beauty and shite…My boldness and excitement come from looking at my subject...; and only when in front of my subject do I forget about the unpleasant things in life. When angry I paint, when afraid I paint, when happy too.’ After being included in a Young Contemporaries exhibition at Agnew’s in 1986, Bramham had his first one-man exhibition at the Fine Art Society in 1988, and over the next several years exhibited at the Marlborough gallery in London.Throughout the 1990’s, Bramham’s preferred subject matter was suburban London landscapes, and in particular views from the window of his home in Richmond. Studied at different times of the day and in various seasons, the streets and scenery of suburban Richmond are depicted in Bramham’s paintings with a devotion that belies the apparent mundanity of the subject. In 1999 the artist left London to settle in Cornwall, and his landscapes took on a new dimension, with depictions of farmhouses and rural views. Bramham’s work, which is sometimes on a grand scale, can best be seen within the English tradition of landscape painting and reflects, for example, the particular and longstanding influence on the artist of the work of John Constable. Yet his work remains largely unknown to all but a few enlightened critics, curators and collectors. In a review of Bramham’s Marlborough exhibition in 2002, the critic Brian Sewell praised the artist as ‘a seriously competent landscape painter... His work has parallels with the landscapes of Lucian Freud and the German painter Anselm Kiefer, both men of outstanding international reputation and in demand. Dare one say that Bramham is technically the best of the trio? That he is may well be the reason for his neglect, for technical skill is now so much despised and official support is reserved for technically incompetent painting - but we should look beyond his ability to represent a tree as a tree and a farmyard as a farmyard, beyond his interest in detail, beyond the seeming delicacy, and see that though the handling of paint is smaller in its scale, it has something of the rough robustness that is the prime characteristic of Kiefer, though without his bleak Weltanschaung, and something too of Freud's peering intensity with elements that interest him…These are undemanding pictures and yet they offer far more reward for contemplation.’