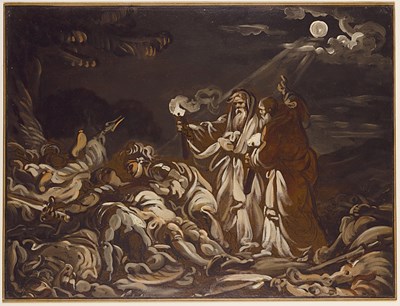 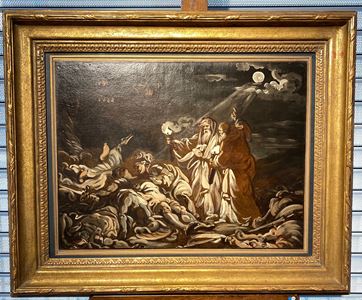 Achilles Lamenting the Death of Patroclus(?)


As Mary Tavener Holmes has commented, ‘Deshays had a predilection for the sketch made with the brush as a preparation technique. The dynamic quality of the sketch accords well with his often dramatic subject matter, and he produced a great number relative to his overall output. They are...loose and energetic in their brushwork, yet with a fine sense of proportion and volume often absent in vigorous sketches.’

A characteristic of much of Deshays’ work in an abiding interest in dramatic light effects, readily evident in this nocturnal scene. It is arguably in oil sketches such as the present sheet, rather than in his relatively few surviving finished paintings, that Deshays’ abilities can be seen to their best advantage.

A stylistic comparison may be made with Deshays’ The Abduction of Oreithyia, executed in oil on paper, in the collection of the Kunsthaus Heylshof in Worms.

Achilles Lamenting the Death of Patroclus(?)