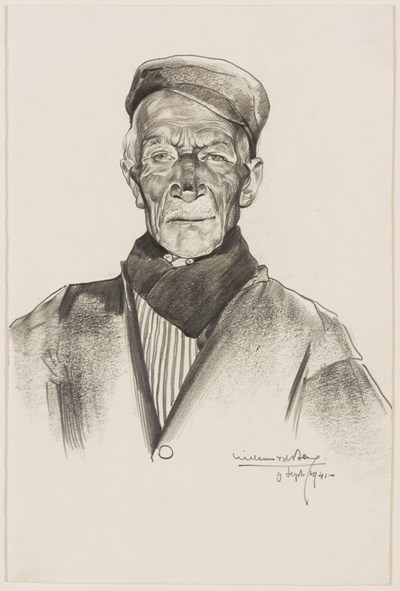 
Situated about twenty kilometres northeast of Amsterdam, Volendam was originally the harbour of the nearby town of Edam, at the mouth of the Ij bay. However, in the 14th century a shorter route from Edam to the Zuiderzee was dug as a canal, and the village was no longer used as a port. The harbour was filled with earth (the name Volendam translates as something akin to ‘filled dam’) and the village was settled by fishermen and farmers, but for the most part remained resolutely untouched by modern life. Village culture has always been deeply tied to the Catholic church, and Volendam has produced many missionaries and priests. It has also been an artistic colony, and such foreign painters as George Clausen, Walter Langley, Pablo Picasso, Auguste Renoir, Frits Thaulow and Théo van Rysselberghe are known to have spent time there. It remains a popular tourist destination today, known for its old houses, quaint fishing boats, and the traditional costumes worn by many of the Volendammers.

At Volendam, Willem van den Berg painted and drew the local inhabitants and their houses. His portraits of the Volendammers, dressed in their traditional costumes, are incisive character studies displaying intense concentration.

As one art critic wrote of another of the artist’s Volendam portraits, in terms that are equally applicable to the present sheet; ‘this face encloses all familiar solitude that is committed to the distances, the sea and the clouds. This is the Volendammer as he used to be when Volendam was on the sea, still unknown to strangers. Such a tough and tanned face, typically individual and of a strong and unyielding personality, does not appear in the masses; it can only exist in space and in solitude.’