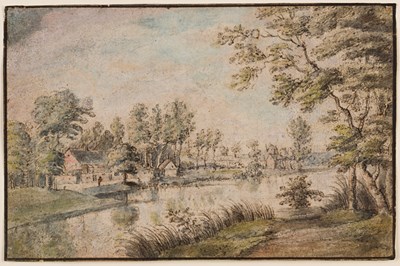 A Wooded Landscape with Houses Seen Across a River


The present sheet is a fine example of the landscape studies for which Lucas van Uden was known, and the combination of delicate pen and ink lines with touches of watercolour is a characteristic feature of the artist’s draughtsmanship. As one scholar has noted, ‘In his many water-colour drawings Van Uden often achieved a refinement and a certain tenderness that are not always present in his paintings; it is as though he could express himself better in smaller works. The drawings give a good picture of the flat Flemish country and the wooded fringes of Wallonia. Water often plays an important part in his compositions. It is questionable whether the drawings were made direct from nature; they seem rather to have been conceived as ‘finished’ studio pieces based on sketches made out of doors in chalk or with the pen.’

Almost nothing is known of the collector P. (or Gaston?) de Ramaix, whose collector’s mark of an enlaced G and R appears on the verso of the sheet. The same mark is found on a number of prints and drawings – mainly by Dutch and Flemish artists – which have appeared on the art market in recent years, as well as several prints in the Groeningemuseum in Bruges and others in the Fondation Custodia in Paris and the Kupferstichkabinett in Berlin.

A Wooded Landscape with Houses Seen Across a River