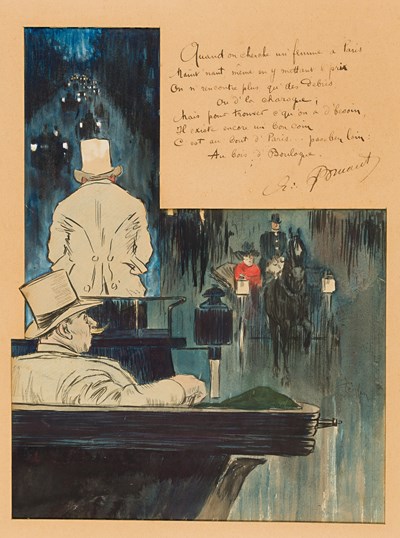 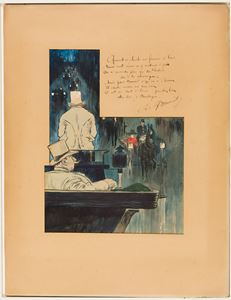 
This drawing by Steinlen illustrates the song ‘Au Bois de Boulogne’ by Aristide Bruant, and was used for the cover of the July 1891 issue of Le Mirliton, a Parisian journal founded by Bruant in 1885 and named after his café of the same name. The cover, as eventually printed, incorporated the score and the lyrics of the song, which alludes to the nocturnal activities known to take place in the Bois de Boulogne, the large park near the western edge of Paris. The lyrics to the song, written by Bruant on the mount of this drawing by Steinlen, may be approximately translated as ‘When looking for a woman in Paris / Nowadays, even if one pays good money / We only meet debris / or carrion; / But to find what you need / There is still a good spot / It’s at the end of Paris ... not far away: / At the Bois de Boulogne.’

As Phillip Dennis Cate has noted of Bruant, ‘His songs were of street people…sung in the argot of the street. They circulated rapidly among the bistros and the unsavory parts of the city, and he soon became their chansonnier populaire…For ten and a half years, [Le Mirliton] appeared monthly, sometimes biweekly. It existed primarily to publicize Bruant’s songs, although later, in 1892, it developed into an organ for all Parisian café-concerts.’ Over a period of eleven years, Steinlen produced around 150 cover illustrations for Le Mirliton, for which Toulouse-Lautrec also worked. Between 1885 and 1889 Steinlen’s drawings for Le Mirliton were signed with the pseudonym ‘Jean Caillou’, while from 1890 onwards his illustrations were signed with his real name.

By 1896, however, Steinlen had stopped working with Bruant. As Cate has noted, ‘in spite of his numerous lighter-hearted images of bohemian life in Montmartre that are found especially in Aristide Bruant’s Le Mirliton and in Gil Blas illustré, Steinlen never strayed far from social commentary; he rarely abandoned his primary rôle of alerting his contemporaries to social evils…In 1896, after a more than ten-year association with Bruant as the principal designer of images to accompany the latter’s gutsy songs in Le Mirliton and the compilation of songs in the two volumes of Dans le rue (1888 and 1895), Steinlen declined to continue that work for the singer’s second volume of Sur la Route, because Bruant’s songs no longer shared the artist’s social realism.’

The present sheet may perhaps be identified as one mentioned in passing in the English periodical The Athenaeum in April 1905: ‘Two interesting art sales were held at the Hôtel Drouot, Paris, at the end of last week. One of these consisted of pictures and drawings by Toulouse-Lautrec and Steinlen. Some, if not all of those by the latter were at one time in the collection of that notorious chansonnierAristide Bruant, and served to illustrate Bruant’s two collected editions of verses. The Steinlen drawings, for the most part, realized only small prices, 500 francs being paid for one called ‘Au Bois de Boulogne,’ and 300 fr. for ‘Aus Bois de Vincennes’.’

As one scholar has written, ‘Steinlen’s work for Le mirlitonreflects some of the social conditions of the last quarter of the 19th century…Steinlen vividly recreates a distinctive aspect of Paris in the 1890s – the bourgeoisie’s predilection for mingling with the lower classes. Steinlen’s greatest gift is his ability to capture essential aspects of contemporary life. In encouraging him in the depiction of such themes, Bruant and Le mirlitonhelped to shape Steinlen’s art.’

This same drawing by Steinlen was also used for the cover of the 1 November 1891 issue of the literary and artistic review La Plume; an issue devoted to the ‘chanson moderne’.