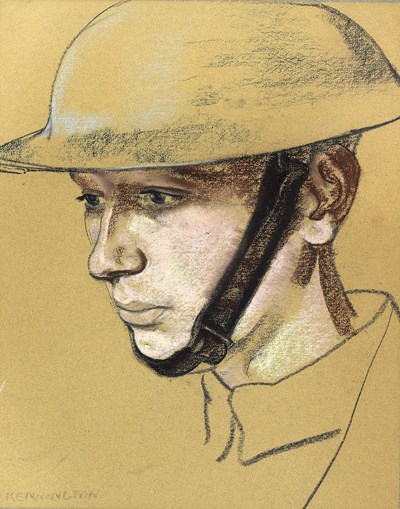 Portrait of a Soldier Sold


In the preface to the catalogue of the exhibition of Eric Kennington’s war drawings, held at the Leicester Galleries in London in 1918, Robert Graves wrote of the artist that ‘he is a soldier, and at home in trench and shell hole, knows what is happening, what to see, where and how to see it; more important still, he has the trench point of view, and cannot forget how in the dark days of 1914 he gulped his rum and tea, fried his bacon, filled his sand-bag, ducked under his first bullet, stared into black night across the parapet and endured terror and misery as a private in the infantry. The British soldier, as Mr. Kennington has known and portrayed him, is a changeless type, wherever he fights, however he is armed, equipped, organised...in the middle of horror, frozen, stunned, bleeding, thirsty, tired nearly to death, choking with gas, the British soldier frowns and sweats and shows with what majesty he can fight.’ Similarly, in one of a series of books about Official War Artists, Campbell Dodgson wrote that, ‘The resolute, weather-beaten faces of soldiers, hardened by endurance, nerved to deeds of daring in the coming raid, or pathetically altered by suffering as they lie in hospital, gassed or blinded, unconscious or bearing acute pain with stoicism – these are Mr. Kennington’s principal themes. Many of his drawings are unspeakably sad; how could they be otherwise, being manly and serious portraits of men who act or suffer in this most terrible of wars?’ Kennington himself, in a letter of June 1918, noted of his drawings that he tried to ‘get as much as possible of the magnificence of the men, all their fine qualities and varied characters and appearances.’The present sheet once belonged to Kennington’s friend, the war poet Siegfried Sassoon (1886-1967), who met the artist, through Robert Graves, in 1918. He later helped Kennington to find a new studio on the Brompton Road after his final return from the battlefields of France in 1919. Sassoon’s Memoirs of an Infantry Officer, published in 1930, has been described as ‘probably the classic personal account of the First World War in English.’7 In a letter written in July 1918, probably after seeing the Leicester Galleries exhibition that summer, Sassoon stated that he thought that Kennington’s ‘soldier drawings [were] excellent.’

Portrait of a Soldier