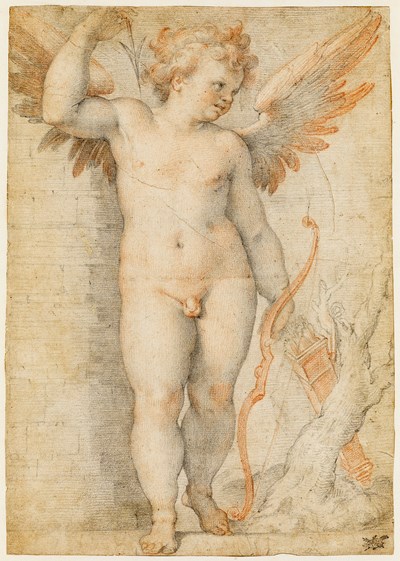 
An exceptional draughtsman, Roncalli worked for the most part in both black and red chalk, switching easily between them for both compositional and figural studies, although using the former slightly more in the 1580s and 1590s. (While a number of pen drawings by the artist are known, after the 1580s he seems to have worked almost exclusively in chalk.) His earliest datable drawings – studies for works of the late 1570s, as well as copies after Raphael - already show a mastery of form and line and a sophistication that would be characteristic of the artist’s drawings throughout his career. Well over two hundred drawings by Roncalli are known today, the largest group of which is in the Uffizi in Florence.Previously attributed to artists as varied as Hendrick Goltzius (1588-1617) and Agnolo Bronzino (1503-1572), this superb drawing, which also shows something of the influence of the draughtsmanship of Federico Zuccaro (1543-1609), seems closest in style to the early work of Cristoforo Roncalli. Indeed, among stylistically comparable drawings by the artist is his first securely datable sheet; a highly finished study of Apollo in the Uffizi, drawn in black chalk with touches of red chalk, which can be dated to his time in Siena, between the end of 1576 and his departure for Rome in early 1579. Chandler Kirwin’s comments on Roncalli’s draughtsmanship at this early stage in his career, as exemplified by the Apollo drawing, are also pertinent for the present sheet: ‘in the effortless sculptural modulations of form, in the skillful control of chalks, and in the assured handling of the nude in a convincing space – in all this Roncalli demonstrates that his drawing talents are indeed sophisticated.’ This large and highly finished drawing cannot be related to any surviving work by Roncalli, and it is quite possible that - given its scale and the presence of a landscape background, as well as its overall unity as a composition - it was intended as an autonomous work of art. Among other drawings by Roncalli that are similar in technique and handling to the present sheet are two drawings in the Uffizi; a study of Christ at the Column3, preparatory for a fresco of c.1586 in Santa Maria in Aracoeli, and a drawing of Lucrezia. The facial type of the cupid seen here is akin to the heads of three children on a sheet of studies in red chalk in the Uffizi, while similar winged putti are also found in several paintings and drawings by the artist, typified by four drawings - two in black chalk and two in red chalk - in the Uffizi, which are studies for the mosaic pendentives below the cupola of St. Peter’s in Rome, executed around 1600. Similar putti are also found in a highly finished red chalk drawing of a design for an elaborate table fountain, formerly in the collections of Robert Udny and the Earls of Warwick and sold at auction in 1997.The earliest known owner of this drawing was the English portrait painter, author and connoisseur Jonathan Richardson, Senior (1667-1745), whose distinctive collector’s mark is found at the lower right corner of the sheet. Richardson owned a remarkable collection of nearly five thousand drawings, mainly Italian works of the 16th and 17th centuries, most of which was dispersed at auction in London in 1747. The drawing is thought to have later belonged to the 18th century painter Sir Joshua Reynolds (1723-1792), although it does not bear his distinctive collector’s mark. The leading portrait painter in England, Reynolds assembled one of the largest collections of paintings, drawings and prints of his day. His collection of several thousand drawings, for the most part Italian works of the 16th and 17th centuries, was dispersed at two auctions in 1794 and 1798. The present sheet is also said to have been in the collection of the history painter Benjamin West (1738-1820), although it bears no trace of the drystamp that he used as a collector’s mark. West succeeded Reynolds as President of the Royal Academy and was, like him, an avid collector of drawings.