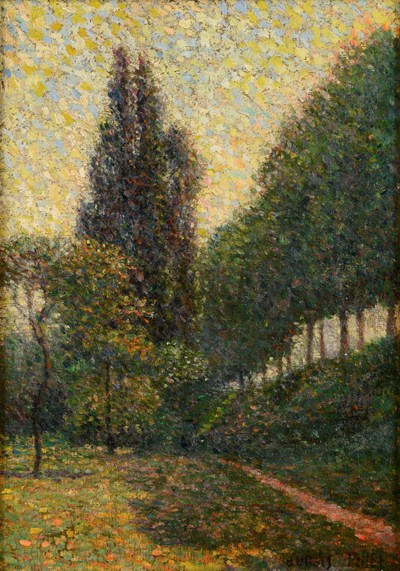 
Views along the Seine and Marne rivers were among Albert Dubois-Pillet’s favourite subjects. The island of La Grande Jatte, just outside Paris on the Seine, between the bridges at Courbevoie and Asnières, was a fashionable spot that many Parisians visited on weekends. It was also popular with artists at the end of the 19th century, and was painted by Claude Monet, Alfred Sisley, Vincent Van Gogh, Charles Angrand and Albert Gleizes, among others. Certainly the best-known work to be painted there, however, was Seurat’s monumental pointillist canvas A Sunday Afternoon on the Island of La Grande Jatte, painted between 1884 and 1886 and today in the Art Institute of Chicago. While Seurat was working on the large painting in his studio, he showed it to only a handful of colleagues, notably Dubois-Pillet and Paul Signac. This small, poetic canvas of a Landscape at the Grande Jatte by Dubois-Pillet was painted shortly after Seurat exhibited the huge A Sunday Afternoon on the Island of La Grande Jatte at the eighth Impressionist exhibition in May 1886. The first owner of the present painting was the scholar and critic Félix Fénéon (1861-1944), a champion of the Neo-Impressionist artists, who presumably acquired it directly from the artist, either as a purchase or perhaps as a gift. Fénéon was a great admirer of Dubois-Pillet’s work. As he wrote in a review of the second Salon des Indépendants of 1886, ‘M. Dubois-Pillet shows ten paintings and we know a few more. His slightly blond vision lends to his oils an astounding pastel delicacy. A diffused, amber, lucid light imbues the landscapes with convincing sky colour and receding distances.’ In an article published a few months later, Fénéon wrote at length about this painting: ‘In the Pré en contre-bas (July 1886) the pale and intense summer sky of M. Dubois-Pillet asserts its quality through blue speckling; within this blue are sown seedlings of light orange which transmit the sun’s rays; and this combination of colours, from which white tends to be revealed, are punctuated by a pink, a complementary colour to the Veronese [green] which crests the line of the trees. From a couple of steps away, the eye no longer perceives the brushwork: the pink, the orange and the blue are composed on the retina, coalesced in a vibrant chorus, and the sensation of the sun imposes itself: indeed, it is known – from the experiments of [James Clerk] Maxwell, the measurements of N.-O. [Ogden] Rood - that the optical mix creates luminosities that are much more intense than the blending of the pigments.’