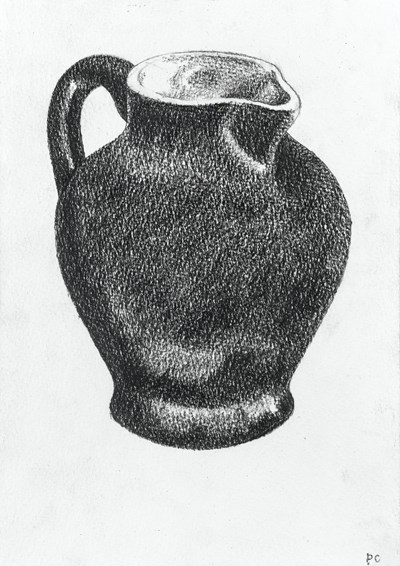 
Drawn in 2003, shows that Patrick Caulfield's skills as a draughtsman remained formidable even during his final illness. As his friend the art historian Marco Livingstone recalled, after Caulfield underwent a major operation for the cancer diagnosed in November 2002, ‘more than a year passed before he again felt strong enough and sufficiently motivated to return to painting, having made only a few small but typically beautiful pencil drawings in the meantime.’ The motif of a jug or pitcher had appeared - either individually or as elements in a larger still life - in Caulfield’s work throughout his career. This is particularly true of the artist’s graphic work, such as a series of large screenprints of Jugs, published between 1981 and 1983.Caulfield’s drawings were, for the most part, private exercises not intended for exhibition or sale. In an interview at the opening of a recent exhibition of drawings by Caulfield, Livingstone noted that ‘It opens his methods up to us, so one can see how he proceeded as an artist…They're very unselfconscious drawings and lines – you can see him thinking, which I find very exciting. I've known his work for years and never seen many like this, because he never liked to show them. He used drawings in quite a traditional way of thinking things out. You see him working out options and trying to zero in on paintings. These were purely part of the process for him, not to be seen.’