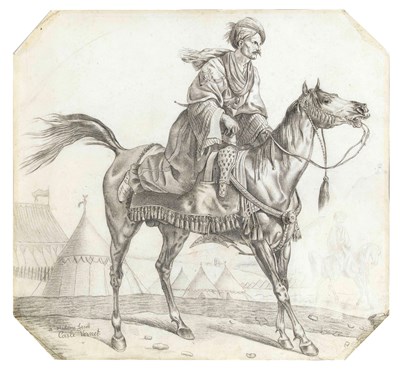 A Mameluke Mounting his Horse Sold


Carle Vernet produced a number of drawings and watercolours of Mameluke warriors, many of which were reproduced as lithographs or engravings by other artists. This large sheet is a preparatory study for one of these prints; a lithograph entitled Mameluck en Vedette, part of a series of six lithographs of Mameluke subjects designed by Vernet and published by François Seraphin Delpech. (An impression of the print is in the collection of the British Museum.) Popular with collectors and connoisseurs, these large and finished works date from the first decade of the 19th century, and were inspired by Napoleon’s campaigns against Mameluke tribesmen in his conquest of Egypt. For artists such as Vernet, as for the French public at large, the Mameluke and his magnificent Arabian steed stood as a symbol of the fierce exotic warrior; the proud horseman of the desert.

Provenance:
Given by the artist to a Mme. JacobPrivate collection, France.

A Mameluke Mounting his Horse