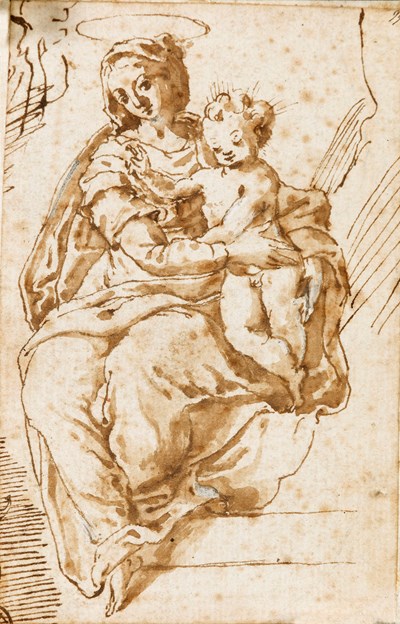 The Virgin and Child Sold


The present sheet is a typical example of Marco da Faenza’s animated draughtsmanship, which is characterized by fluid penwork and areas of soft brown wash. Like many of his drawings, it shows something of the influence of the artists with whom he worked in Rome during the 1570’s and 1580’s, notably Raffaellino da Reggio and Cesare Nebbia. Drawings by Marchetti are relatively scarce and, as they can only rarely be connected with known works, are often difficult to date. The largest number of drawings by the artist is in the collection of the Uffizi in Florence, while a small but significant group is in the Louvre.An autograph variant of this drawing, of similar dimensions, was in a Swiss private collection in 1967.The inscription G.F.M. on the verso of the backing sheet would appear to be the initials of an as-yet unidentified 17th or early 18th century collector of drawings. The same inscription is found on the backing sheet of a drawing by Giulio Romano which was on the art market in 2003, as well as on two other drawings, both by Nicolas Poussin of a dancing Bacchus; one in the Krugier-Poniatowski collection and the other in the J. Paul Getty Museum in Los Angeles. All three drawings are numbered in a similar manner to the present sheet; the Giulio Romano is numbered 94, the Krugier Poussin 93 and the Getty Poussin 109. Two further drawings with the G.F.M. inscription, both anonymous sheets of the 16th century and numbered 108 and 125, are in a French private collection. The numbering of these drawings would suggest that the collector assembled his drawings in albums.

The Virgin and Child