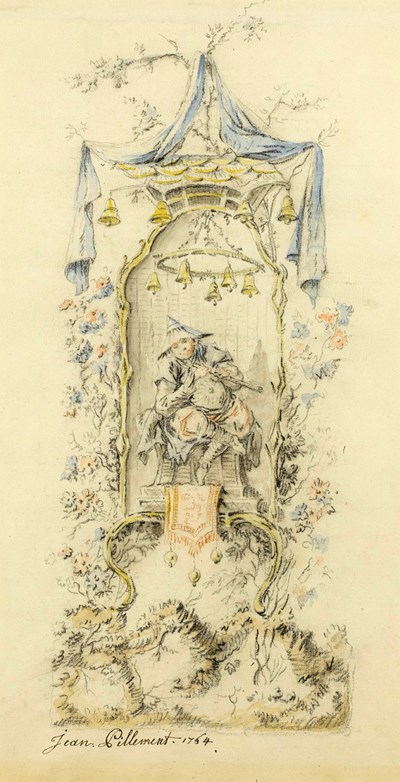 A Chinoiserie Design, with a Seated Oriental Musician Sold


Soon after his arrival in London in 1754, Pillement began to cater to the English vogue for chinoiseries, publishing collections of ornamental prints inspired by Eastern motifs. These were led by a group of six engravings which appeared in 1755 as A New Book of Chinese Ornaments invented and engraved by Pillement, followed soon after by A New Book of Chinese Designs. As Maria Gordon-Smith has noted of the second edition of A New Book of Chinese Ornaments, which appeared in 1757, ‘From this point on, chinoiseries became Pillement’s very own domain. This collection was the first of many to place him as the heir to the chinoiserie tradition of Watteau and Boucher. However, in his interpretations the exotic motifs were even more independent from any imitations of Far Eastern originals and represented a highly personal imaginative faculty. What was probably intended to be, at first, an incidental and minor commercial occupation, turned out to be an immediate revelation and eventually a source of lasting fame for the artist.’ In all, more than three hundred prints after Pillement’s landscape, ornament and chinoiserie drawings appeared while he was working in London.Pillement continued to produce new and novel designs for chinoiseries throughout his stay in England and afterwards, and in 1767 a collection of his designs was published with the title One hundred and thirty figures and ornaments, and some flowers, in the Chinese style. The success of this project added greatly to Pillement's reputation, and his designs were to prove a significant influence on the decorative arts in Europe for many years.This delightful sheet, signed in full and dated 1764, is likely to have been produced as a collector’s drawing in its own right. However, a very similar compositional arrangement, with four Oriental musicians – each depicted seated on platforms beneath a canopy hung with bells and surmounted by a blue cloth - appears in Pillement’s painted chinoiserie decoration of a large hall in the palace of Schloss Niederweiden in Austria, commissioned by the Empress Maria Theresa around 1764 and completed by the spring of the following year. As a recent scholar has described the room, ‘Between the windows, surrounded with flower-covered trelliswork, four large chinoiserie figures appear on each side of the room seated on ornate platforms within a frame of draperies adorned with bells and surmounted by canopies surrounded by a profusion of climbing flowers.’ Such charming and original compositions as this, with their immense visual appeal, were the source of much of the artist’s contemporary fame. As another author has written, ‘[Pillement’s] chinoiseries exaggerate wispy, fragile qualities of the style. It is as though the world is a fairyland conjured out of gossamer and stalks of grass, and the humans inhabiting it, fanciful little creatures who dance and tumble around so effervescent and lively they seem more creatures of the air than earth.’

A Chinoiserie Design, with a Seated Oriental Musician