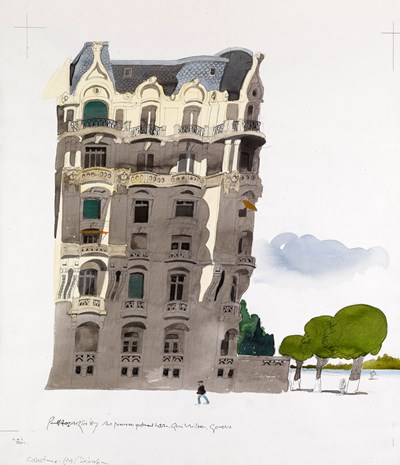 
The architectural historian Peter Blake has noted that ‘Paul Hogarth is not exactly a recorder of architecture, he is a lover of buildings. He idealises them, romanticizes them, makes fun of them, and ultimately identifies with them. His drawings and watercolour washes are like love letters to buildings; and, like love letters, they exaggerate. They make you smile. Not many artists know how to get a building to make you smile. Hogarth knows.’ A similar sentiment was expressed by the architect Sir Hugh Casson, who once said that ‘There’s nobody to touch Paul Hogarth for catching a building’s likeness – dead right without a trace of laborious correctness.’