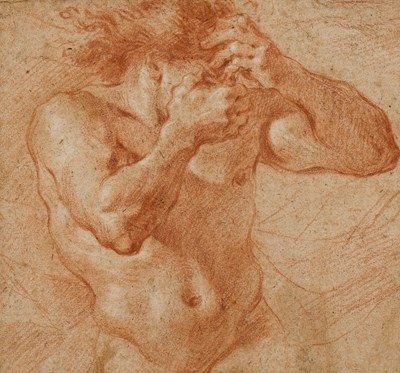 Study of a Male Nude Sold


A basic tenet of the Carracci academy was the importance of life drawing, and Ludovico, like his cousins, produced a number of academic studies of male nudes in red chalk. This was especially true of the years before 1600, a period which accounts for the majority of his drawings in the medium. A recent reassessment of Ludovico’s draughtsmanship has led to a clearer understanding of the artist’s use of chalk in the last two decades of the 16th century, especially in comparison to Annibale Carracci’s better-known chalk studies of the same period. As Babette Bohn has written, ‘During the 1580s and 1590s, Ludovico’s style was quite naturalistic, because he was much more active as a draftsman in chalk and much more involved in the careful preparation of his pictures in preliminary drawings than had previously been supposed. Ludovico emerged as an artist who was quite committed to the use of chalk figure studies in preparation for his paintings and prints before 1600, although the drawings were sometimes used for different purposes than Annibale’s chalk figure drawings.’ Most of Ludovico’s surviving chalk drawings before 1610 are studies of single male figures, depicted either full or half-length, and reflect the standard practice of drawing from the posed model.The attribution of the present sheet to Ludovico Carracci has been confirmed by Babette Bohn, who dates the drawing to the second half of the 1580’s, early in the artist’s independent career. Based on a close examination of the drawing, Bohn has noted of the present sheet that ‘the relatively strong command of anatomy, somewhat compromised by the handling of the neck and shoulder area, is characteristic of many Ludovico drawings, particularly during ca. 1585-90. The convincing sense of weight, notwithstanding the dynamic patterns of light and shadow that break up forms rather than furthering the portrayal of volume, is also characteristic of Ludovico's drawings during the later 1580s.’ A stylistic comparison may be made with such Correggesque red chalk drawings of this period by Ludovico as a half-length study of the nude torso of a youth in the British Museum, which is in turn a study for a figure standing at the right edge of a painting of The Flagellation, traditionally attributed to Ludovico, in the collection of the Accademia Carrara in Bergamo.The present sheet cannot be related to any known painting by Ludovico Carracci, and may well have been done simply as an exercise in life drawing, like a number of the artist’s chalk drawings of the 1580’s. Babette Bohn has pointed out, however, that this drawing may have been an unused idea for a terminus figure in a fresco decoration, similar to the ignudi that appear in the frescoes of scenes from the story of Aeneas painted by the three Carracci in the Palazzo Fava, and variously dated to between 1586 and 1593.

Study of a Male Nude