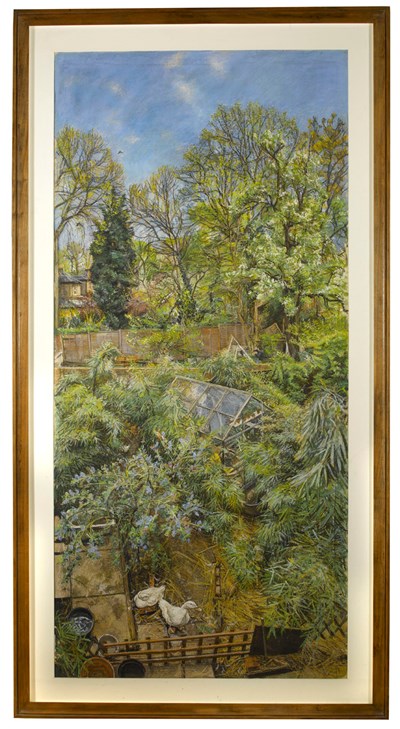 
This very large and impressive sheet, drawn in the spring of 1996, is a remarkable tour de force of pastel and watercolour, and depicts the view from the artist’s studio in Richmond. It is the last and largest of three related works of the same title and subject, the other two having been drawn and exhibited the previous year; all three are tall and narrow compositions. In more general terms, this monumental drawing belongs with a large group of paintings and pastels, executed in the second half of the 1990’s, focusing on the angled view from the artist’s studio window down into his garden, here depicted with its ducks and greenhouse with, in the middle distance, a fence and beyond a glimpse of a neighbour’s garden, with a child on a swing. The brightness and intensity of the colours in the present sheet, with the garden depicted in sunshine, is unusual in Bramham’s work, in which a more subdued tonal palette usually predominates.When the present work was exhibited at the Yale Center for British Art in 2000, it was noted that, ‘though executed in gouache and pastel, mediums that invite spontaneity and loose strokes, Bramham has not deviated from his usual, laborious style. The odd aerial perspective is testimony to the artist’s practice of painting or drawing what he sees from his upper-story window in Richmond – the ducks, in fact, are family pets. The intensity with which Bramham has studied his backyard, the linear precision of the tree limbs, and the attempt to render every leaf and wisp of straw, pays tribute both to Bramham’s mentors, Dürer and Freud most prominent among them, and to his personal attachment to the landscape…Devotion to and love of the subject matter is what keeps Bramham so intently focused. In painting the world literally at his doorstep, with care and consideration, he discovers the strange beauty of nondescript streets, rows of garages, and railway embankments. It is this ability to render the familiar fresh and new that gives Bramham’s work its power.’

Literature:
Patrick McCaughey and Emily M. Weeks, The School of London and Their Friends: The Collection of Elaine and Melvin Merians, New Haven, 2000, pp.60-63, no.29 (entry by Emily M. Weeks).